There is never a good moment to write an update on Brexit, so please forgive the fact that by the time you read this it will probably be out of date (again)! But as I write on Thursday morning.

So I will continue to vote for measures that protect our national interest, prevent a ‘no deal’ Brexit, ‘managed’ or otherwise, and give us the time to let the public decide.

By way of background: As I have set out before in previous briefings, as an ardent ‘remainer’ I was prepared, however reluctantly, to countenance an approach which respected the 2016 referendum result but which did not damage Britain’s economy, security or influence- by staying in the Customs Union and the Single Market.  This seemed in the early days to be the basis of a compromise around which a majority could come together. It would have had significant disadvantages over full membership, of course, but was infinitely better than either ‘no deal’ or the Government’s deal. Theresa May’s adoption of the hard-Brexit ‘red lines’ made negotiating such an option impossible and we are struggling to cope with the consequences of that position today. Of course, I also believe that triggering Article 50 so early – in March 2017 –  was a terrible mistake (and voted against it) and that it would be impossible to complete negotiations in this time. It gives me no pleasure to know that this has been proved right.

We will see what happens tomorrow. I’ll be on the march on March 23rd  which will once again demonstrate the strength of feeling in support of a ‘People’s Vote/Final Say’, but who knows if this will already have been overtaken by events.

I am obviously delighted that the Mayor and Transport for London have recognised Royal Oak would not be appropriate site for a coach station. This is not least because of our strong local concerns about air quality and the impact of existing traffic levels. Bayswater Councillor Maggie Carman, alongside residents and other local campaigners, has been working extremely hard on this. Both she, Councillor Adam Hug and I have lobbied hard to both make the case and demonstrate the level of community concern. Therefore, It is a great relief to know these have been listened to. Below is a copy of the letter I received from the Mayor of London about the decision and here is the link to the Evening Standard story. 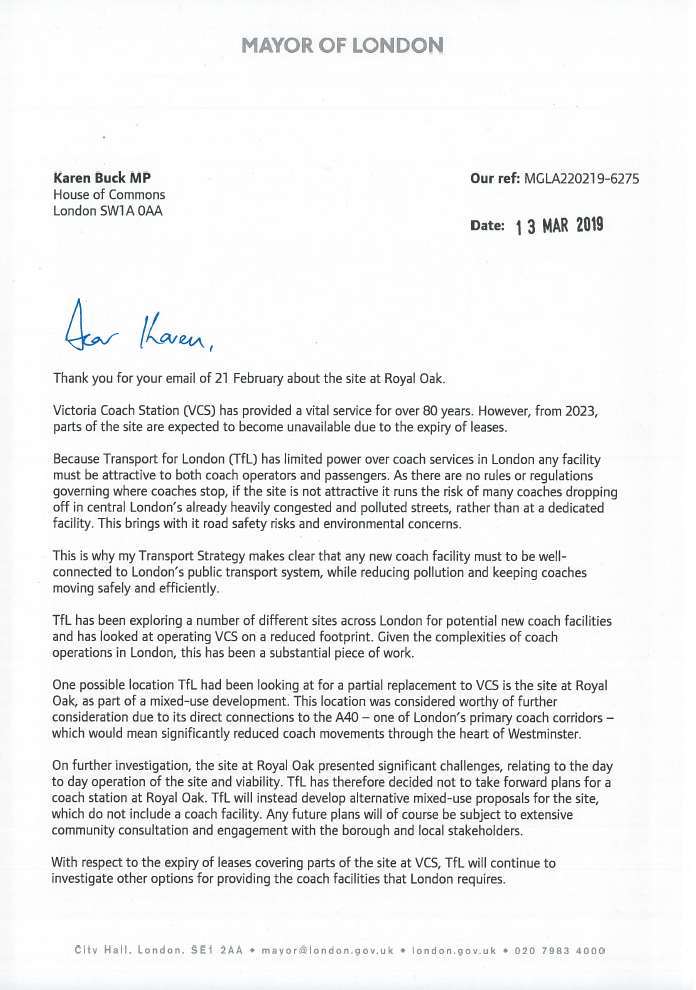 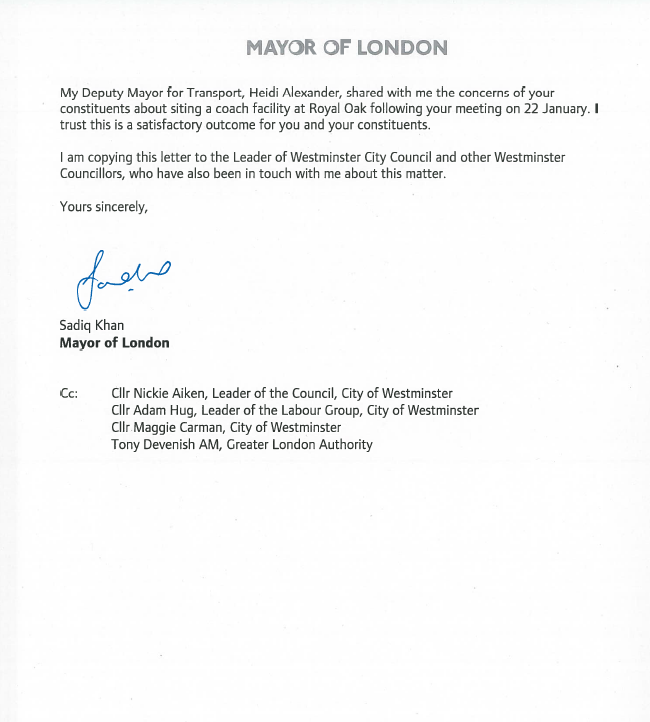 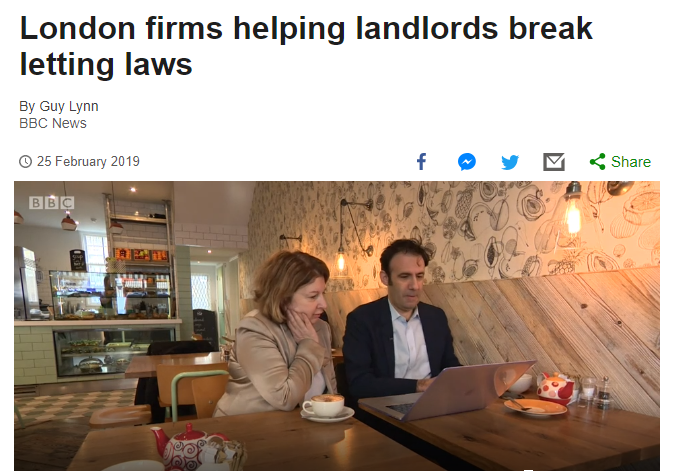 In January you heard from me about the increasing number of people who have been in contact over the growing use of short-term holiday lets in the Borough.

At the time, I had just written for the Mail on Sunday about some of the issues these short lets can cause for neighbours and local residents. For instance, I have heard about residential properties effectively being run as hotels and about the adverse affect, this can have on local areas.

A wider problem in London is of course that these properties could provide permanent homes for long-term renters, which are becoming harder and harder to come by.

At the end of February, I spoke to BBC News about a recent investigation which revealed that some firms have been explaining methods to potential clients on ways in which they can get around this rule. For example by using new photos to make previously listed addresses appear as new or by slightly altering the name.

This footage showing the employees of certain short-let platforms advising clients on how to break the law is shocking, disappointing and completely contrary to everything we were told about how short-let accommodation would work. I very much hope that these and other harmful practices can be brought to a stop.

This is one of the many reasons I will be working with cross-party colleagues over the coming months to set up an All Party Parliamentary Group on the Short Lets Sector. We hope by working alongside platforms like AirBnB we will be able to establish ways in which we can minimise the illegal use of these sites and other undesirable consequences.

We hope to work with a number of the key groups most affected by this rapidly growing industry, we also hope to offer assistance and guidance to Local Authorities, short-let sites and the Government on how this growth can be managed more effectively.

You will hear more from me on these developments in the near future but for now, if you are experiencing problems with short-term holiday rentals in the area, please do not hesitate to contact me. 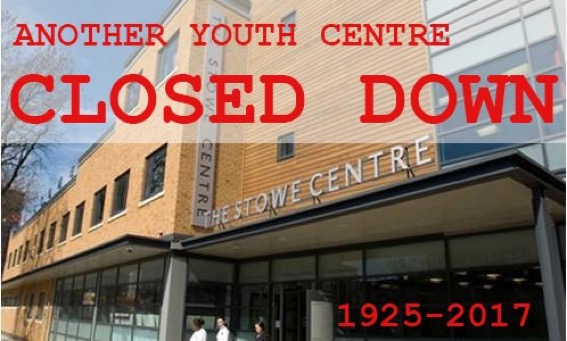 Along with 50 Parliamentary colleagues, I signed a letter calling for additional help for the police to help tackle the recent surge in violent crime (please find below). But policing alone won’t be sufficient- I spoke in Parliament about the importance of prevention work and early intervention, and that means support for facilities like our youth centres. Westminster Council pulled all funding two years ago and there is now almost nothing provided for our young people. It’s not just about activity, either- these services helped identify people at risk of becoming victims or being drawn into gangs. I’m continuing to work with the Avenues Centre, All Stars Boxing club and others to help them do their best to survive in these very challenging circumstances. 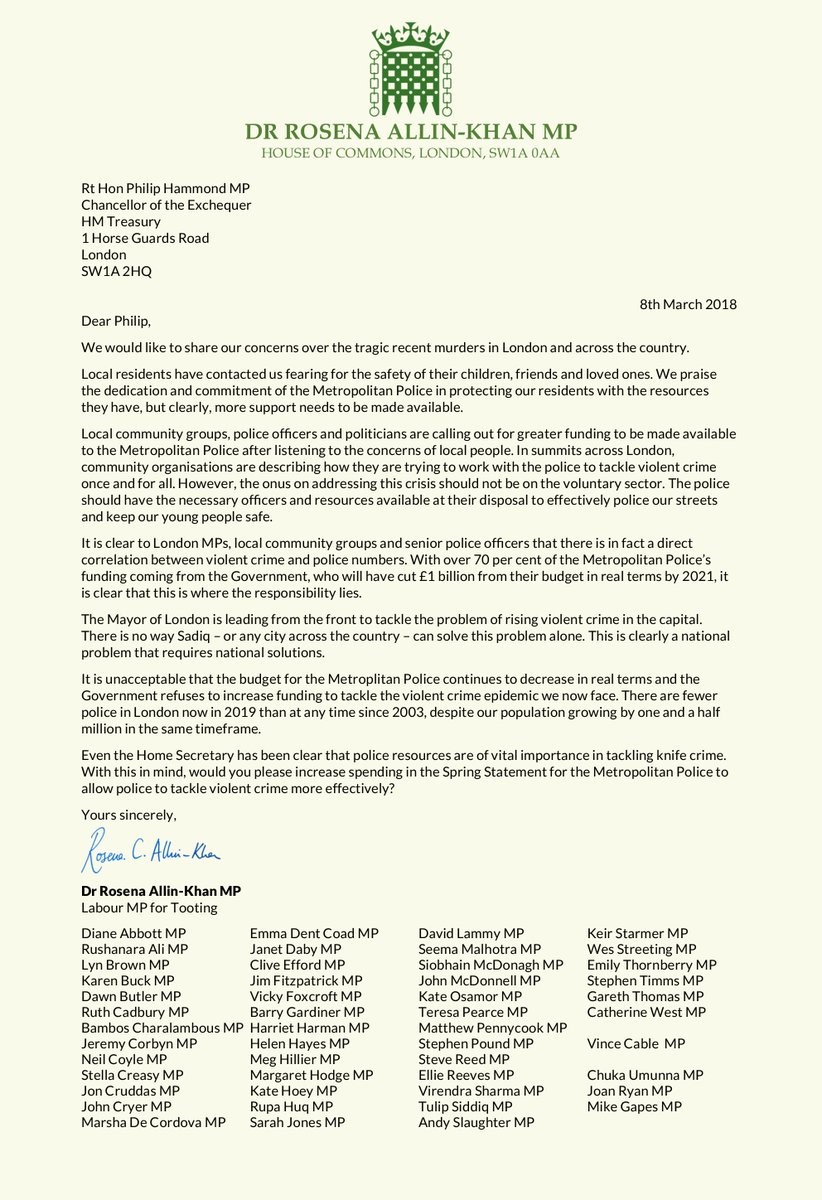 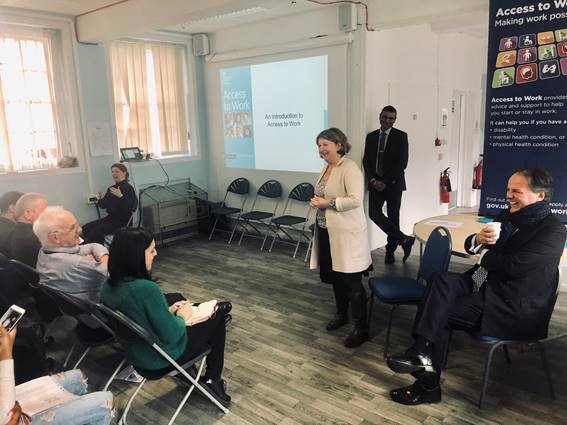 Today (Thursday 14th) it was great to have an opportunity to speak at the DWP led Employer Disability Confident Event with Conservative MP for the south of the Borough, Mark Field. At a time when politics can feel particularly divisive, Mark and I are always happy to take opportunities to work together on important projects like this.

The Disability Confident scheme was introduced in the summer of 2013 and it is aimed at supporting disabled people in the workplace. This can range from making workplaces accessible for people with a range of disabilities to ensure that jobs are advertised in an accessible way.

It is important that we continue to try and reduce the employment gap between disabled and non-disabled people which, as of June 2017 was 49.2% for people with disabilities. In comparison, the equivalent employment rate for people without disabilities is 80.6%. The event was incredibly well attended and I am grateful to all the prospective employers who attended and to the DWP for helping to organise.

Thank you for reading and your comments are always welcome.